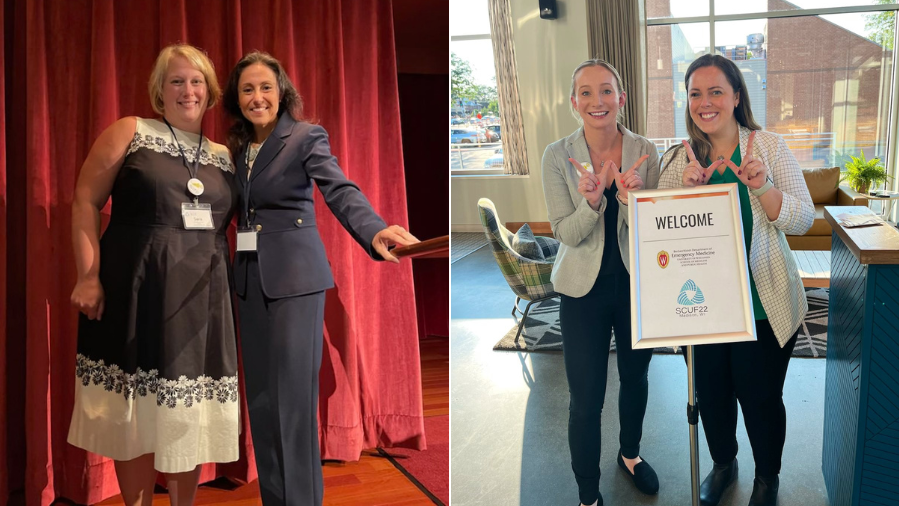 It’s back to business as usual this week for our Division of Emergency Ultrasound, which hosted SCUF22 from Sept. 13-15, 2022. Led Drs. Sara Damewood and Hani Kuttab, with support from Program Manager Taylor Johnson and Division Program Assistant Emily Johnson, the host committee put on an incredible three-day conference and represented the leadership and excellence that the UW School of Medicine and Public Health signifies.

More than 250 physicians and vendors from across the country descended upon Madison’s Monona Terrace and Convention Center for the 2022 annual conference for the Society of Clinical Ultrasound Fellowships (SCUF), the leading national society among the Clinician Performed Ultrasound community. SCUF aims to support collaboration and to foster advanced training through one- and two-year fellowships.

The three-day conference took more than a year to plan and significant coordination between UW as conference hosts and SCUF leadership. A pre-conference kicked off the week on Tuesday, September 13, and included an ultrasound technology summit, program updates, and a series of lectures and breakout sessions for junior faculty and fellows. Dozens of speakers took the stage on days two and three of the conference to discuss a range of topics, including emerging ultrasound trends, innovations in education, leadership in academic medicine, and creating an inclusive ultrasound community.

Dr. Azita Hamedani, associate professor and founding chair of the BerbeeWalsh Department of Emergency Medicine at the UW School of Medicine and Public Health, kicked off a lecture series on best practices in faculty and fellow recruitment. Dr. Mary Westergaard, associate professor of emergency medicine and Vice Chair of Education at the BerbeeWalsh Department of Emergency Medicine, also led a mindfulness meditation and gratitude session to start the final day of the conference.

Keynote speakers included Dr. Vicki Noble—one of the founding leaders in point-of-care ultrasound, a world-renowned ultrasound educator, and a true advocate for the specialty—and Dr. Jose Díaz-Gómez, a luminary in the fields of anesthesia and critical care. He has made significant contributions to the Society of Critical Care Medicine (SCCM), including elevating the education of critical care ultrasound, as well as mentoring junior faculty in ultrasound courses and ultrasound committees over the last decade.

The Society of Clinical Ultrasound Fellowships expressed their gratitude, saying, “We would like to give many many thanks to the University of Wisconsin team led by Sara Damewood for their efforts and tremendous amount of time and attention to making this conference happen.”

Dr. Hani Kuttab was also honored with SCUF’s Shazam Award, which is given to individuals who have delivered amazing, timely and impactful work for the organization.